“The death of an Ontario First Nations man who was pepper sprayed, beaten, handcuffed and stepped on by two police officers was accidental, a coroner’s inquest has determined.”

via Death of First Nations man handcuffed and stepped on by police was accidental, inquest says – Thunder Bay – CBC News

Just a little more info on this article, I went to the web site of the NISHNAWBE-ASKI POLICE SERVICE and did a search for “Romeo Wesley” the 34 year old man who died while in their custody! Here is a screen clip of the “News Release” from their site! 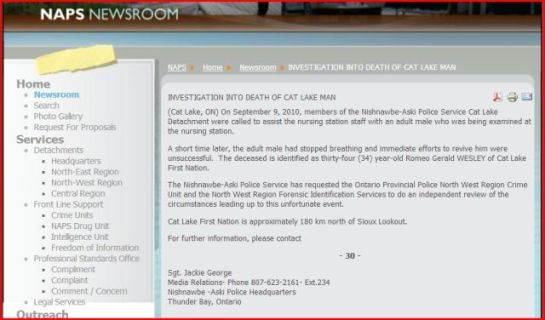 “Donald Trump casts himself as a protector of workers and jobs, but a USA TODAY NETWORK investigation found hundreds of people – carpenters, dishwashers, painters, even his own lawyers – who say he didn’t pay them for their work.”